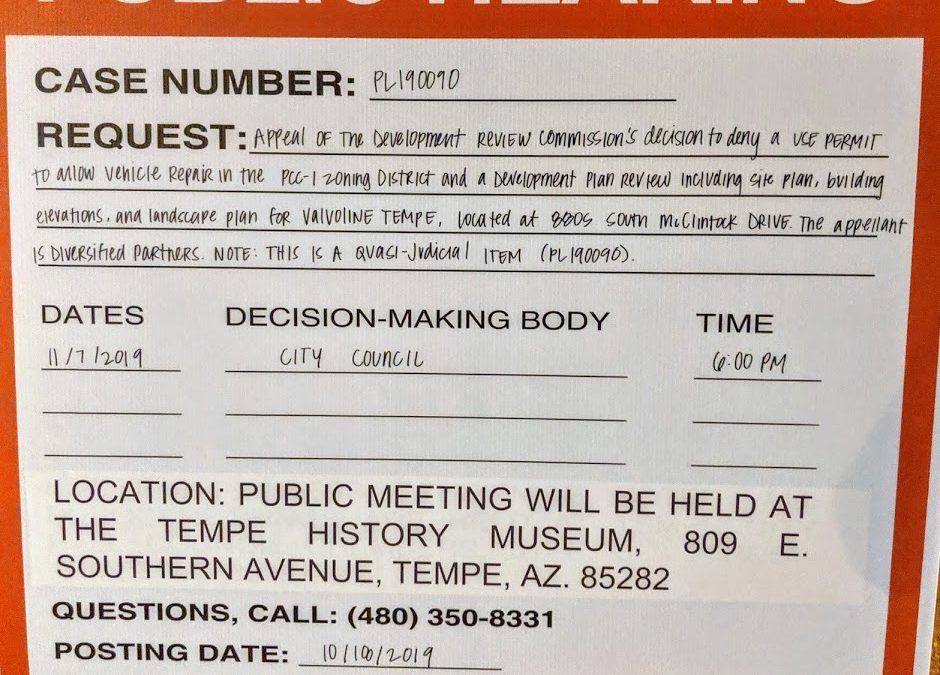 If you live in Tempe, especially South Tempe, there’s a good chance you’ve heard about the proposal by a property owner who wants to put a Valvoline branded shop on the corner where a Shell gas station once stood. That proposal was turned town by Tempe’s Development Review Commission.

**Update: the lot was sold in January of 2020. Continue to the bottom of this post for details:

If you are following the story, you know that a group of neighbors are strongly opposed to having a Valvoline shop built on this corner where the Shell was torn down. The DRC apparently agreed and said the project does not fit in their 2040 plan. Interestingly enough, we have heard that they would have approved the project if the old building had not been torn down.

After the article was posted, there was a lot of discussion around neighborhood water coolers. One such discussion made me think a lot about how interesting it will be to see what the City Council does next. 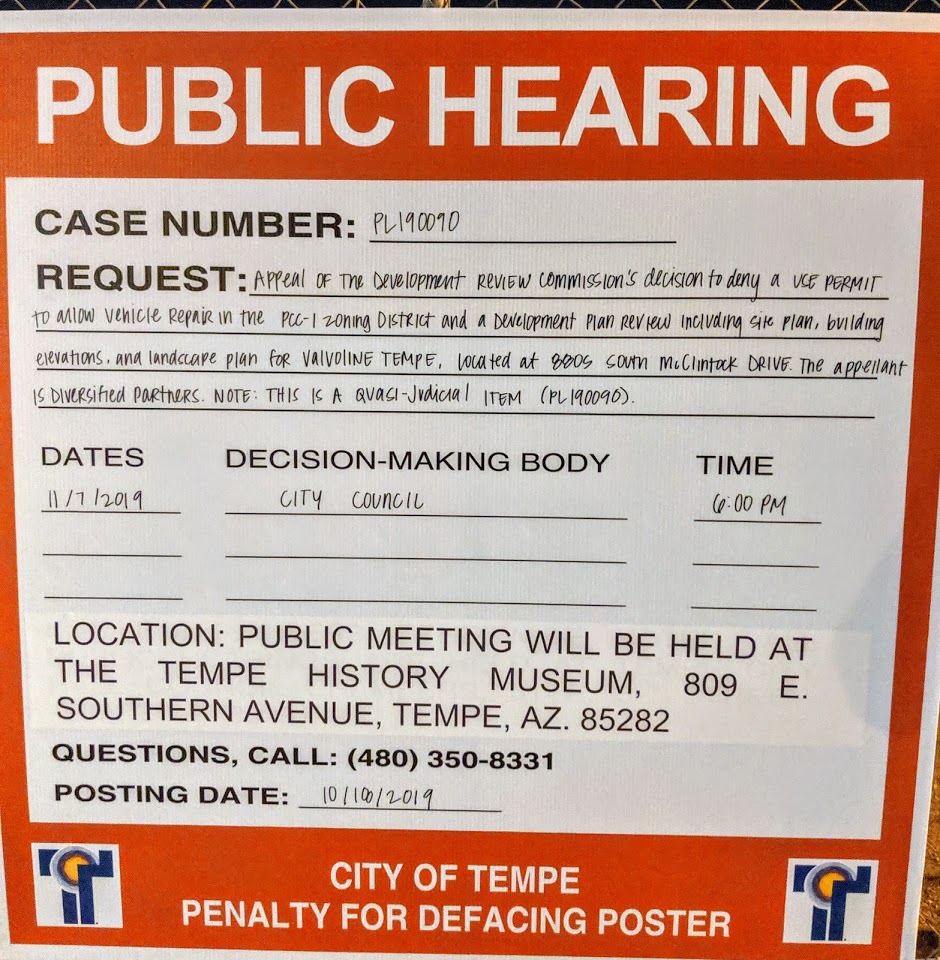 For easier reading, this is what it says on the sign in the pic above:

Appeal of the development review commission’s decision to deny a use permit to allow vehicle repair in the PCC-1 zoning district and a development plan review including site plan, building elevations, and landscape plan for Valvoline Tempe, located at 8805 South McClintock Drive. The appellant is Diversified Partners. Note: This is a quasi-judicial item (PL190090)

A friend who is familiar with the developer had a different perspective than what has been more widely reported. In fact, he feels like this is very much a two-sided story. One that both sides will probably need to agree to disagree.

Something that many people don’t know is the fact that the owner / developer has looked at several options for this corner. They have talked to restaurants, coffee shops and other businesses. Valvoline is the one who was willing and able to make their project work here given the size and layout of the property.

At just under an acre, the lot is said to be kind of a difficult size for some businesses. Especially any kind of business that might need parking and access for customers. For a small business to make something work here, it will take a pretty big investment.

While I am not a huge fan of the project and I agree that many people would like some “awesome, local business” to do something here, many of us are not familiar (or concerned) with the economics of actually making it happen.

To tell an owner of a piece of property what they can and can not do with their property seems like a slippery slope to more than one person familiar with this corner. Especially when the use is so similar to what was last built on the property.

Did the DRC act in good faith by listening to community members or have they trampled on the private property rights of the owner of this piece of land? To me, those are important questions.

If this goes to a city council vote, it will be very interesting to see what they do based on feedback from city staff, the city attorney and the public.

In a perfect world, there would be buyers lined up a mile deep to build something that all of the community would want to support. While the market in South Tempe seems very strong and ‘new” places like the Tempe Public Market, Ghost Ranch, Cotton and Copper, Maskadores, Oink Cafe, Sweetest Season, and Word of Mouth Grill have all been well received by the community, it sounds like it will take a lot of work, effort and cash to make something work on a lot like this.

The lot in question is at the SE corner of McClintock and Warner. Right across from where some of the same people opposed to this project had come out against Raising Cane’s being built on the SW corner. Interestingly, we have heard from a lot of people who feel like Cane’s is a welcomed addition to the neighborhood. That restaurant looks like it will be opening within the next month.

As we have said, some of us will just have to agree to disagree.

One thing for sure, people love living in this area and want to see quality development. No matter how it is defined…

**Update: 3/30/2020 – The McClintock and Warner story continues… After people complained about Valvoline coming to the SE corner, the DRC and the city council voted unanimously to deny Valvoline a use permit to build on the corner. Since then, there has been talk that the owners would sue the city over the decision. I have heard a few random updates over the last couple of months, but don’t know that a decision has been made.

I do know that the property changed hands at the end of January. The sale price for the lot looks to be $2,000,000. RUMOR has it that the owner believes that they will win the lawsuit and build the lube shop. 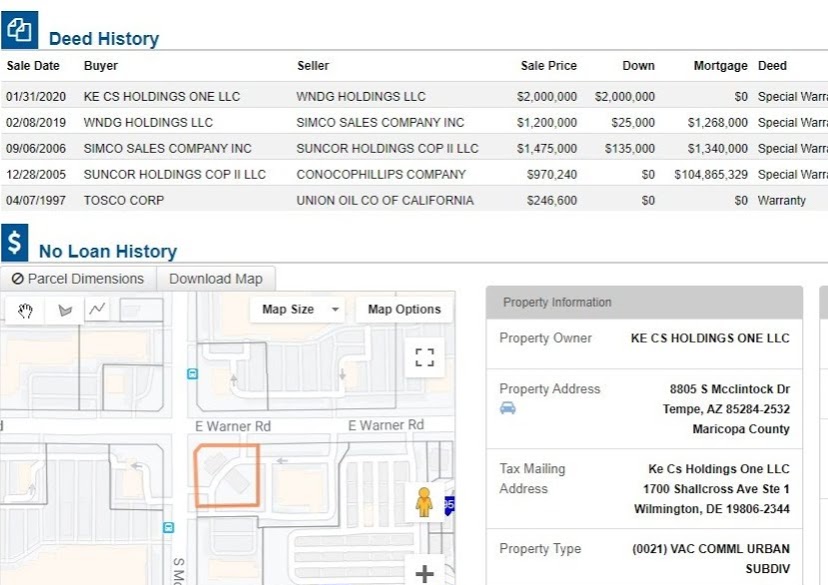 I’m not saying that I am for or against the suit, I am just updating this post with information.

We appreciate your involvement in the community process and want to provide you with an update on the proposed Valvoline at the southeast corner of McClintock Drive and Warner Road. Both the Development Review Commission and Tempe City Council heard your concerns about the development and tried to fulfill the wishes of the area community by denying a use permit for the project.

After the City Council decision, the property owners filed a notice of claim against the City of Tempe for $2.1 million plus legal fees. They then filed suit against Tempe in Superior Court. The negotiated settlement, which is to be considered by the Council on May 27 at the Regular City Council Meeting, grants the use permit and development plan review for the Valvoline property to be built. Property enhancements that had been recommended by staff that Valvoline had originally declined to incorporate into the project, such as setback service bays and improved paving near walkways, were agreed to. The city will not pay out any money as a result of the settlement.

It’s important to note that Arizona has some of the strongest property rights laws in the country. Rather than fighting a lawsuit that the city would be unlikely to win, we are working to be good stewards of tax dollars for all our residents and have the best possible business of its type in that location.

During the process, we heard questions from residents about the validity and use of the Character Area Plan. The City of Tempe and residents produced a Character Area study for this area several years ago and that plan was consulted for this project. While these documents are consulted by staff and elected officials, they are guidelines and can never be used in place of Tempe’s Zoning and Development Code, City Charter, Arizona State law or federal law.

The settlement agreement is not a public hearing item on the City Council agenda and can be viewed at http://documents.tempe.gov/sirepub/mtgviewer.aspx?meetid=1490&doctype=AGENDA, under item 5A11. Any comments may be provided to the City Council by way of Council Communicator email at [email protected] or options provided on the City Clerk’s website – https://www.tempe.gov/government/city-clerk-s-office/public-meeting-schedules-agendas-and-minutes

You can go to the 41:58 minute mark of the video below to see and hear the Council discussion about this matter. 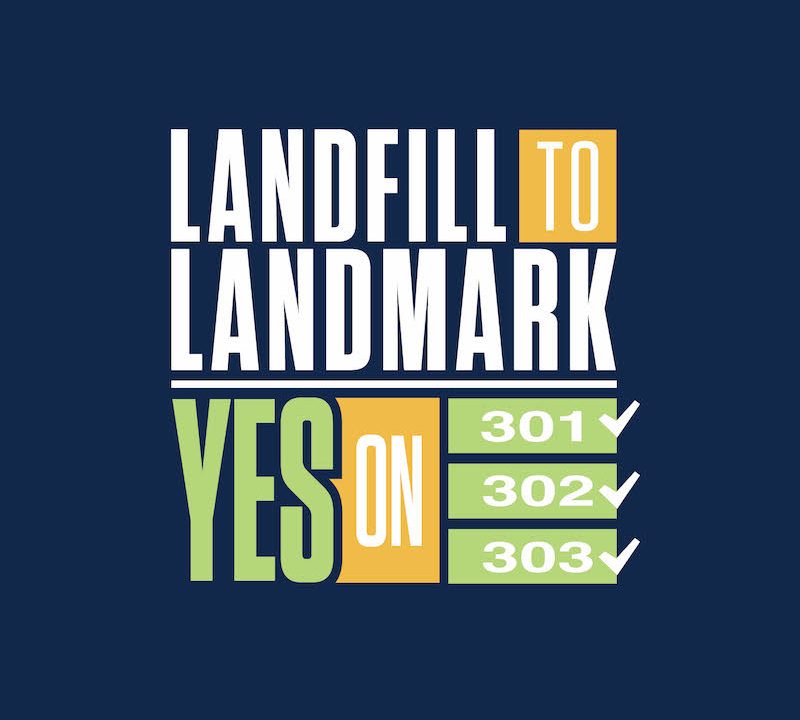