Over Killed In A Tempe Bike Lane 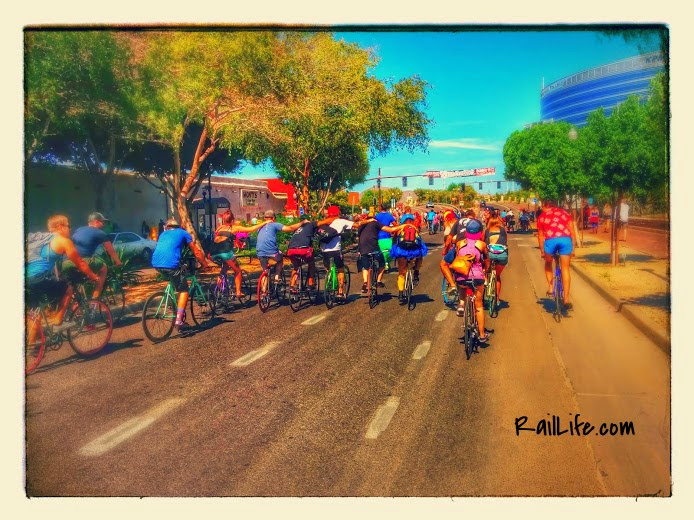 Update: The city of Tempe will be exploring new options for McClintock Drive modifications. Please continue to let the city know how you feel about the bike lanes and let them know how you think it could be modified or brought back to how it was before this failed experiment was implemented.

Update #2: 12/17/2016 –  Mayor Mitchell along with Council members Randy Keating and Robin Arredondo-Savage have been looking at a compromise to the bike lane fiasco. Here’s a link to an AZ Central article titled: Tempe is committed to balancing cars, bikes in transportation plan.

That is why we’ve directed staff to propose options that will restore the street to its original configuration and maintain a bike lane.

All Tempe residents are encouraged to let the council know your thoughts by emailing them at councilcommunicator@tempe.gov 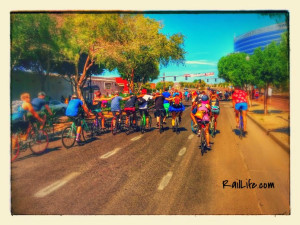 Tempe is certainly a bike-friendly city. In fact, it is an award winning city for being a place where people ride bikes to work and to play. You’ll find miles and miles of dedicated bike paths, and you’ll find tons of great bicycle friendly events where bicyclists are front and center. 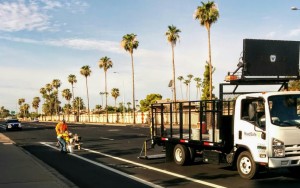 On McClintock Drive, new bike lanes were installed in July of 2015 after “extensive study” and much “community input.” One lane of traffic was removed from McClintock to make room for the new bike lane. Now, there is a bike lane and a warning lane that acts as a buffer between cars and cyclists. There is also a barrier for the warning lane. Seems like a bit of over kill to me. Especially because there are so few people who actually ride bicycles on this stretch of roadway.

Heck, I’d be willing to bet that there’s not very many people in the city of Tempe who have ridden their bike along the stretch between Guadalupe and Southern over the past year than I have. I have personally taken at least 200 trips back and forth over that same route in the last 12 months. Before, during and after the bike lane construction. Prior to the bike lanes being installed, I would mostly ride on the sidewalks. Yes, I know that is evil, right? During construction, I rode both on the street and on the sidewalks along McClintock. Since the new bike lanes have been installed, I am certainly one of the people who use them several days a week. Honestly, I feel safer riding in the bike lanes than I did before, and it seems like the wear and tear on my bike is a bit less. Should there be such a wide lane for bikes? I’m not so sure. One thing I feel pretty strongly about is the candle sticks. They are ugly, they are overkill, they add to the traffic backups, they are bad for business owners in the area, and they are a waste of my ( taxpayer ) money.

The community input is all well and good, but average Joe doesn’t always pay attention to community input surveys until they sit at a couple of extra stop lights during their morning commute. Part of the reason for lack of community input is the fact that there seems to be a huge disconnect between North and South Tempe. Most discussions initiated by our city council members center around downtown Tempe growing upward, building “luxury apartments”, and maximizing “smart growth” in our landlocked city. Urban, urban and more urban seems to be the flavor of the year(s). While that seems to fit in the Downtown Tempe area, it doesn’t seem to sit as well with people south of downtown. Yes, people live in South Tempe, and they pay taxes. A lot of them. Many South Tempeans tune out the noise after a while, because the focus on Downtown Tempe doesn’t always directly affect them. Unfortunately, when people tune out, things like this that are not a good fit for their community get pushed through as an “experiment.”

Below is a McClintock Drive Bike Lane hand out that was provided to the public. It is said to show traffic patterns decreasing in 2014. Interestingly enough, they compare 2014 to 2004. Do you think that is the best comparison to use? People have asked if they looked at the timing of the recession – the period of time when gas prices rose to nearly double of where they are now. There’s a lot of factors that come in to play, and I suppose you can always get someone to post different ways to look at the same type of data to come up with an outcome that serves their purpose.

McClintock Drive Handouts 5.4.2015 <– There’s a link to their study. The photo below shows some of the first page of the report. Click the photo to enlarge it. 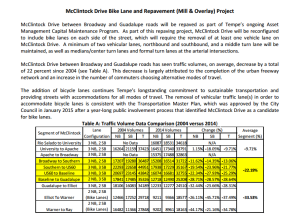 Fast forward to December 5th, 2015 and the next phase of the bike lanes were completed. This phase includes a whole bunch of “candle sticks” that act as a buffer between the buffer zone and the bicyclists. Another lane of safety if you are a serious biker. An ugly, unneeded waste of taxpayer money if you are any of the 99% of the people who travel along McClintock Drive each and every day or own a business along this stretch of roadway

Look, I get it. We are bike-friendly, and we need to be concerned for the safety of people on bikes. Many people who know me know that I’m kind of a transit fan. Yes, I’ve been to Tour de Fat, I have taken the time to meet the guys at T.B.A.G., and I think they do a lot of awesome things. While they will certainly disagree with my criticism of these stupid ballards, I am sure we’ll find things to agree on again in the future. 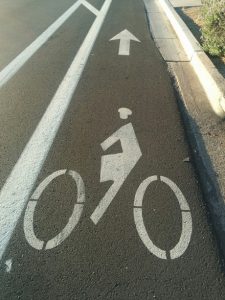 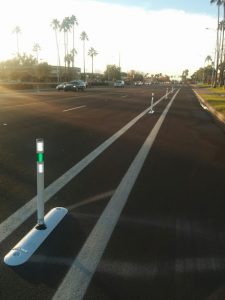 It seems like these ballards / candlesticks / bike lane delineators are popular in many  places in the country and maybe in other parts of the world. I would think they are rather useful in a very urban environment. In fact, I have no doubt they help bikers stay safe, but this stretch of McClintock Drive certainly is not the most urban environment in the city or the state. Heck, you’ll find a LOT more soccer moms than bicycle commuters on this stretch of road. The percentage of people that these help vs the number of people they do not help appears to be far out of line.

These two photos show a couple of examples of why people seem to dislike the ballards in the road. 1, They appear to create a barricade in many places that is less than business friendly. 2. They seem to get in the way of traffic. YES, that is the idea but… 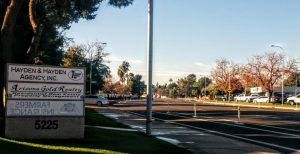 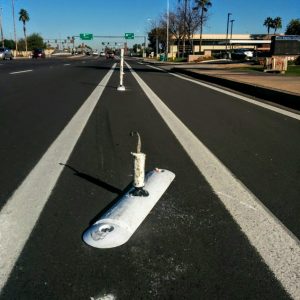 I know there are a lot of people who think these barricade things are an awesome idea. In fact, I’ve seen reactions from people like:

“These are a great addition. Someone get Phoenix to step into the 21st Century, too, please.”

“These are a positive development and should be encouraged. They send a clear message that the bike lane is not to be used for parking or right turns.”

“So glad Tempe is taking steps to make the city safer for cyclists. Change is hard. These barriers can be literally mean life or death for cyclists.”

It has now been a few weeks, and I’ve tried to have a wait and see attitude about the ballards in the bike lanes. While I do enjoy riding my bike in the bike lanes, I still feel like this experiment is overkill for the area. It just doesn’t seem to make $ense to provide so much for so few. While I understand that my vote doesn’t always count, I hope that any future expense is relegated to a true need in an area where it might make more sense, instead of some feel good experiment by a city council member who thinks that it is “just a small part of the budget.”

I’ve seen some of the broken ballards and have reached out to let Mr. Granville know about them. While I asked how much it would cost to replace them, I was just told that “staff” would be notified.

@NickBastianAZ @nickminer I forwarded to staff. They have extras.

Less than two weeks later, I saw two more broken poles in the same place as where the others had been replaced, and I was told the exact same thing. “Staff” will be notified. I guess Mr. Granville doesn’t want me to bother with details. 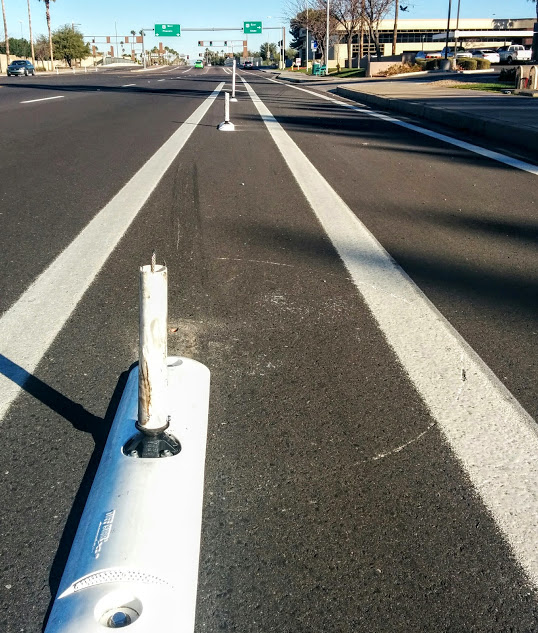 Here’s the text of a letter sent to one of our city council members. I thought it was reasonable. I’d be curious to know what you think of these candlesticks that have been installed in Tempe. Feel free to leave a comment. Yes, I know people have differences in opinion, so please be civil with your remarks or they will be deleted.

In a future post, maybe we can discuss the traffic issues caused by the removal of lanes due to the additional bike lanes…

So, less than a month after the first photo of the broken ballard on McClintock and the EXACT SAME ONE has been run over again. That’s ( at least ) three replacements of the exact same “candle stick” within a month. It makes you wonder how many extras we have and how much is being spent or being done to replace these. I know, I know… It’s a small piece of the budget. 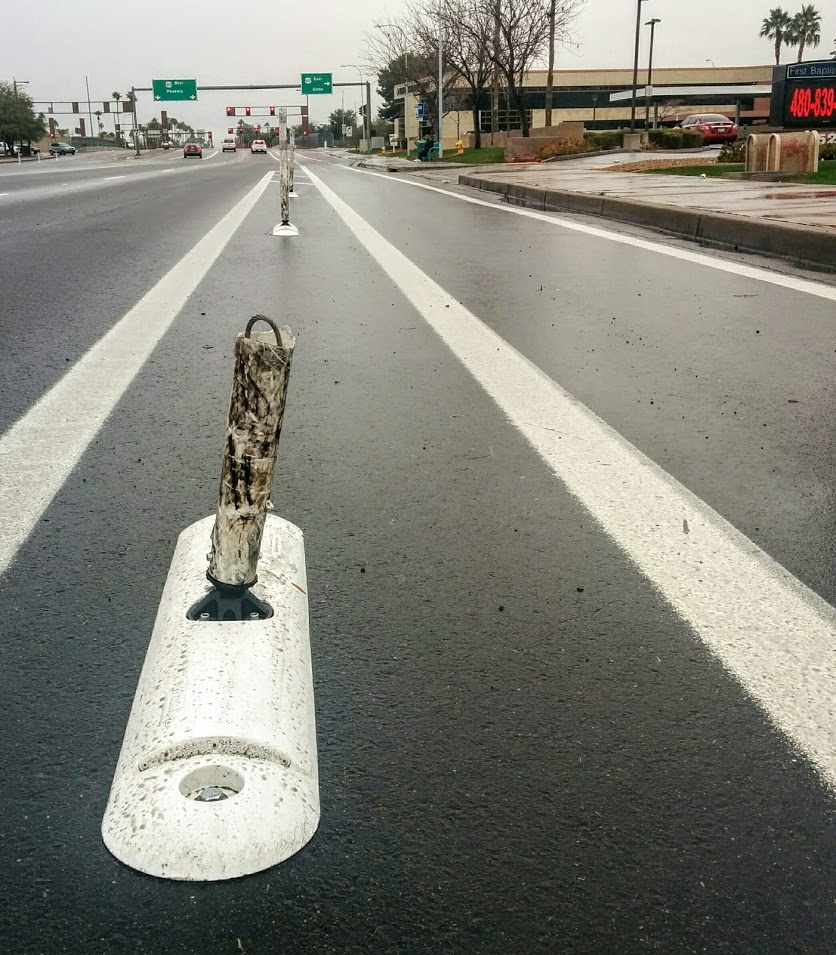 January 22nd, 2016 bike lane casualty number FOUR for the exact same ballard. Heck, this one lasted a lot longer than the first three. Things are getting better! Maybe someone should take a look at the safety of drivers when trying to drive northbound on McClintock as they attempt to head east on US60. I’m no expert but I’d be willing to guess that these candle sticks are causing a lot more damage to vehicles than they were “expected” to do. The following photos shows a piece of the ballard still hanging on by a thread. I’d be willing to bet a LOT of money that this piece will be hit again very soon and will be gone before we know it. As you can see from the black tire marks, it has probably been struck several times. Good thing the city ordered more. Right? 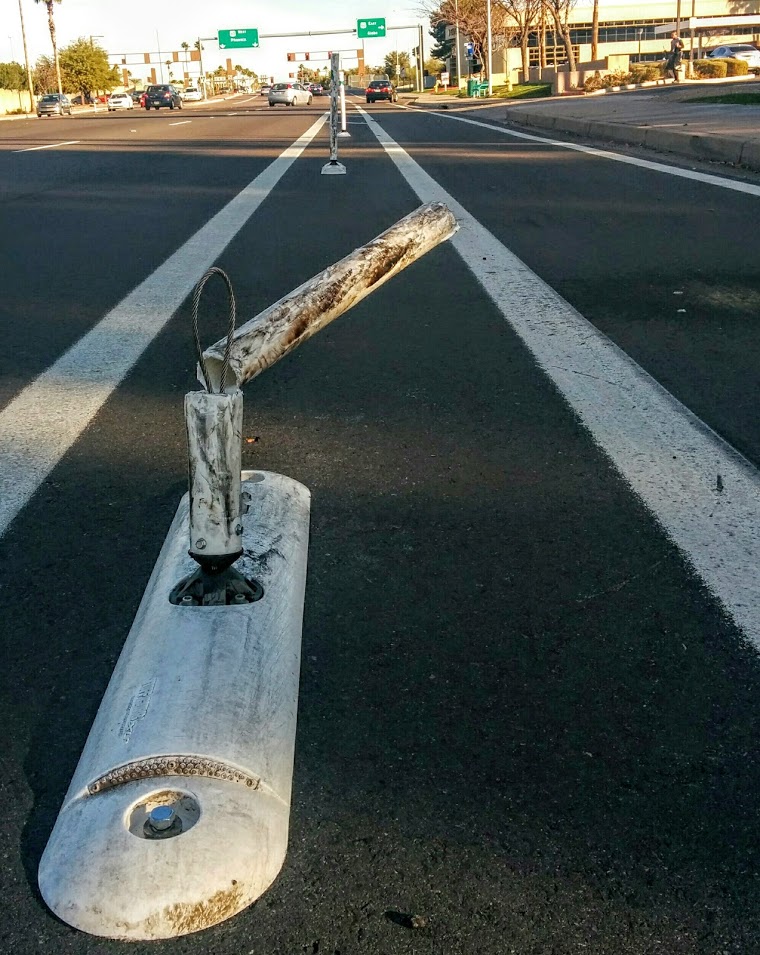 After Four Strikes, Battered Ballards Removed from the bike lane:

Just a couple of weeks after the fourth time these candlesticks / ballards had been replaced they have been removed from this section of the bicycle lane. It make us wonder if they will remove more in the future? Here’s a pic of the section of road that is now ballard free. 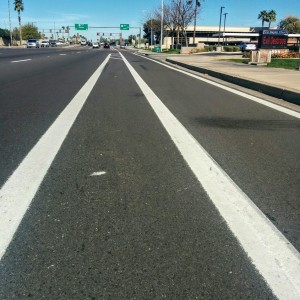